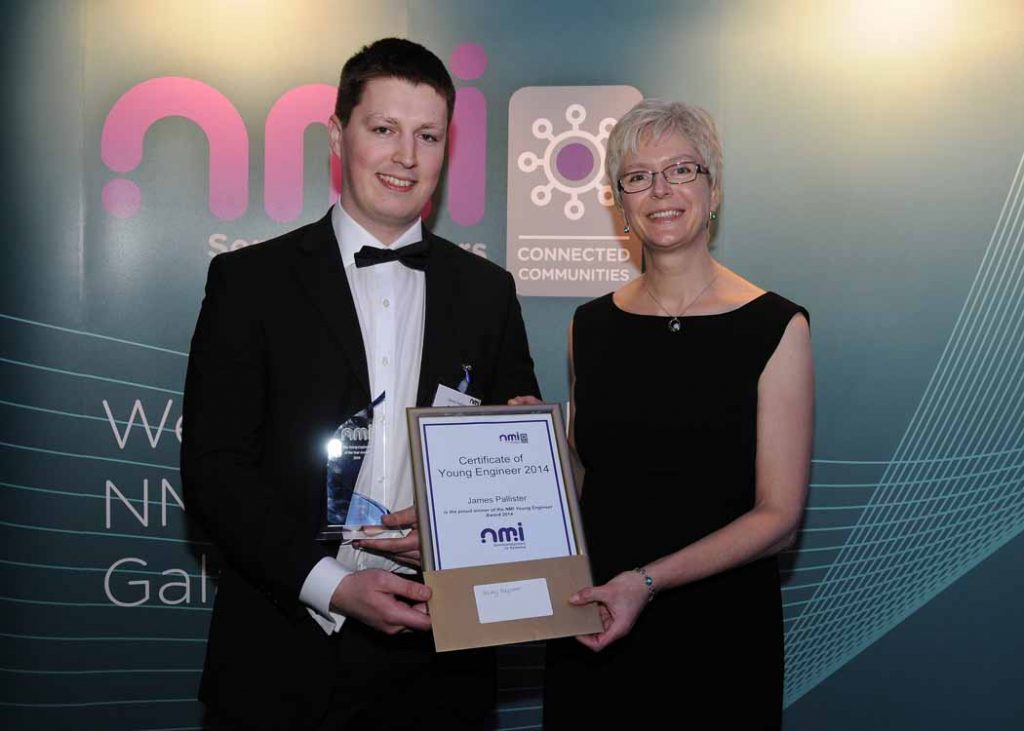 Our very own James Pallister was last night announced as the winner of the NMI Young Engineer of the Year award.

James is a Research Engineer and Technical Advisor to Embecosm, and also a PhD research student at Bristol University, where he studies energy efficient computing systems, and is supervised by Dr Kerstin Eder.

James provided the original research, now published in The Computer Journal, which demonstrated that compilers can have a big impact on the energy usage of compiled code.  This lead to the 18 month MAGEEC project, led by Embecosm and funded by the UK Government, which has built a machine learning compiler system, capable of yielding the energy optimizations identified by James.  During this project he has also initiated the creation of the Bristol/Embecosm Embedded Benchmark Suite (BEEBS), a fully free and open source suite of programs for benchmarking deeply embedded systems. His ongoing research has demonstrated how more energy can be saved by aligning loops in programs in flash — presented at CASES ’14 last month — and by migrating loops to RAM for execution (preprint), ideas which have been incorporated in the MAGEEC project.  Overall his research has shown that it may be possible to reduce energy use of compiled programs by as much as 65%, with as a side benefit of a 60% improvement in execution speed.

During 2014, James has also opened up a new direction of research, leading a feasibility study at Embecosm that was funded by Innovate UK, looking at commercial deployment of superoptimization.  This technique has been around in academic circles for nearly 30 years and aims to generate the theoretically best possible compiled code. It is a fabulously computationally demanding technology and has never been considered feasible for use in the commercial world.  With advances in both software and hardware, James has shown that the technology is finally becoming feasible, and that with relatively modest amounts of further industrial research has the potential for widespread commercial adoption.

This engagement with the commercial success of technology is one of the key attributes the judges looked for in the Young Engineer of the Year award.  James has been a key player in Embecosm’s success and both MAGEEC and Superoptimization are now part of our commercial offering.

If you’d like to hear more about James’s work he’ll be speaking at the BCS Open Source Specialist Group on Wednesday 26 November 2014, and also giving one of the main track talks at FOSDEM on Saturday 31 January 2015, with this latter talk being streamed live if you can’t get to Brussels.

NMI is the active industry association representing the UK Electronic Systems, Microelectronics and Semiconductor Communities. It aims to be the home for the many and diverse sectors of the UK’s electronic systems industry. NMI is the go-to organisation addressing the common challenges including skills provision, R&D funding, manufacturing excellence, design productivity, innovation, employment, advocacy and representation.