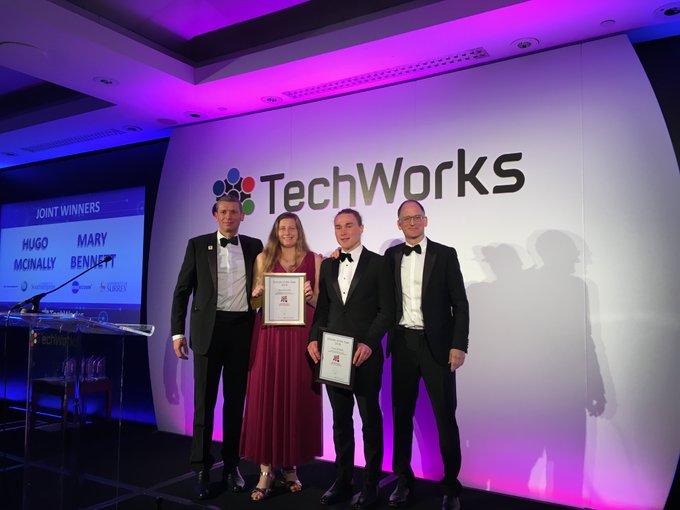 Our very own Mary Bennett was last night announced as one of the winners of the TechWorks UKESF Scholar of the Year award.

Mary is a software tool chain engineer at Embecosm, a masters student at the University of Surrey and the Champion of Academia and Training for the RISC-V Foundation.

Mary has been a key player in Embecosm’s contributions to CGEN, particularly to support the RISC-V Instruction Set Architecture. She continues to lead a research program (in association with Cambridge University Computer Laboratory) providing an interface between SAIL formal models and CGEN, so that in the future it will be possible to automatically generate assemblers, disassemblers, simulators and test frameworks from a formal description of a processor architecture.

Mary is the Champion of the RISC-V Foundation’s Academia and Training Special Interest Group (SIG) and has been leading the effort since December 2017. The aims of this group is to coordinate outreach to the open source community as well as researchers and educators in academia, and to curate and recommend training materials to both academics and professional training organizations. Currently Mary is the key contributor behind the RISC-V Student of the Year Award and Educator of the Year award which is due to be announced December 2019.

If you would like to hear more about Mary’s work, she will be presenting a GNU CGEN for RISC-V Tool Chain Customisation tutorial at the RISC-V Summit in California on 12 December 2019.

The UKESF is the UK Electronics Skills Foundation which is an educational charity, launched in 2010, that collaborates with major companies, leading universities and other organisations to tackle the skills shortage in the Electronics Sector.

TechWorks is an industry association at the core of the UK deep tech community with an ambition to harness our fantastic engineering and innovation to develop the UK’s position as a global technology super-power.