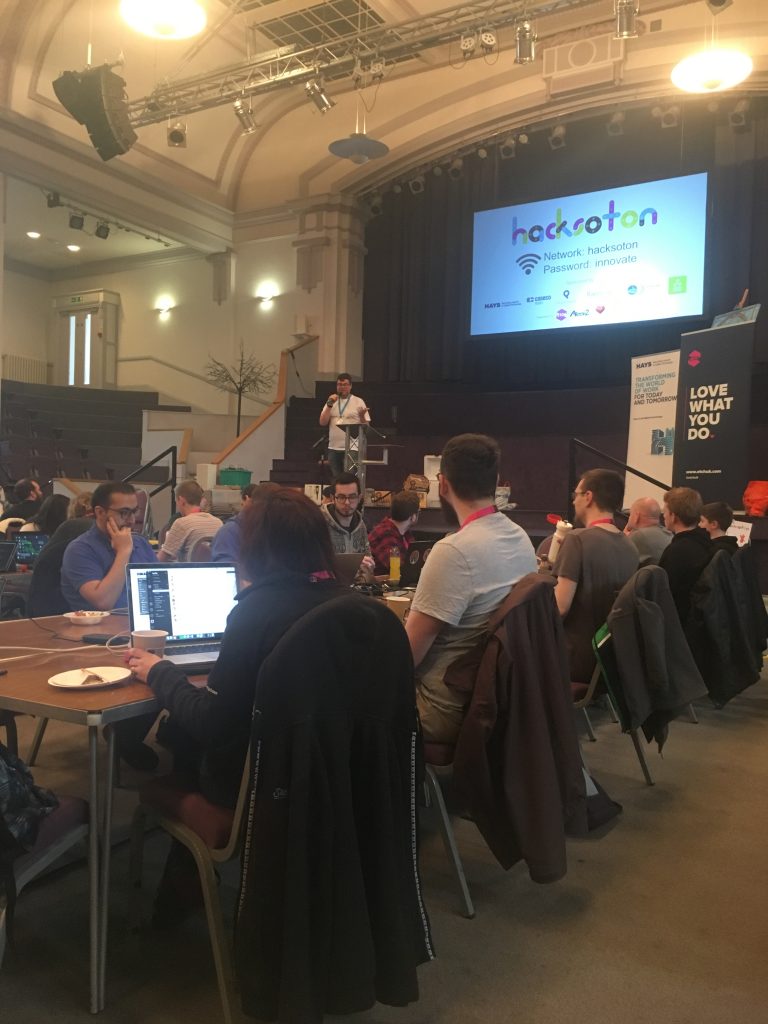 On Saturday 14th April, HackSoton was once again hosted in Central Hall, Southampton. Now in its 9th iteration, it continues to be a day of hacking and helping, whether its working on a project for work, university, or just a hobby.

For those who do not know, HackSoton is a day where people get together to socialise and hack on projects. It welcomes “creative people, regardless of discipline – developers, designers, makers, marketers, storytellers, students, and everything in between”. It is free to attend and is welcoming to all attendees of all ages.

This year was the first time Mary or myself had been to HackSoton, but we had heard the stories of the various activities that go on, such as those mentioned in Judith Jones blog post summarising last years event https://www.embecosm.com/2017/04/04/hacksoton-2017/ .

As the day began, the main room became full of laptops and technical equipment, with people bringing their own laptops, soldering stations and circuit boards to hack on. Mary, Jeremy and myself were there to host a soldering workshop using the Seahorse wearable Arduino clone, allowing people to solder all 31 components onto a seahorse shaped board, and 2 daughter boards.

Before our workshop began, we attended a workshop that looked at chatbots on Facebook. The idea was to create one and program it to do what we would like. However, with the latest data protection announcement in relation to Facebook and Cambridge Analytica, we were unable to create a stand alone bot for our individual interests. Instead, we were able to customise sections of an already existing tester bot. As I am not a software engineer and have only been learning a couple of languages over the last 6 months, I was not really sure what to expect. For me the idea of creating/altering a chatbot was exciting and I was able to get the chatbot doing what I wanted within seconds. I think everyone left the room happy with the small but meaningful achievement we all made.

Then came time to set up for our workshop, with thanks to the people at the local maker space SoMakeIt, we were able to set up 6 soldering stations, a software station and a sewing station.This allowed people to not only solder the kits together but also test they worked and attach them onto a piece of cloth.

The accuracy of the soldering within that room was incredible, and it was enjoyable to hear children saying to us that they wanted to be engineers when they grew up. Once the kits were soldered together, participants were able to program it to check all the soldering was correct. Once the Arduino program was started the LED on the Seahorse should flash. This gave the participants a chance to have a go at debugging their own boards.

We had a lot of interest in the soldering workshop with over 20 people coming and joining in or taking a seahorse board back to their own soldering stations. These participants were of all ages, from the age of 7 upwards.Looking back after a day of soldering I can say everyone who attended had a wonderful time including ourselves.

At the end of HackSoton, everyone was given the opportunity to stand up and show what they had achieved. Two young people standing up to show their soldered boards, and another teddy bear was able to join the tech family.

We would like to say thank you to all the people involved in the planning and execution of the day, and everyone who came to the workshop.